Are These The New Seven Wonders of Nature?

Article Content is Copyright © 2012 - 2021   Peta Daniels  |  Car Rental Buddy
Captivating, amazing, and intriguing! These are just some of the words to describe the list of potential new Seven Wonders of Nature.

The world is an amazing canvas illustrating a range of natural beauty and picturesque locations. The following ideally demonstrate the strength in nature and its ability to express and create captivating locations for all of us to explore and experience.

Let us know your thoughts on the following and share with us what you think should be part of the Seven Wonders of Nature.

Table Mountain is an South African icon and is amazing within its sheer capabilities to withstand the test of time. Table Mountain is both picturesque and precious in its offerings of providing home to a range of over 1,400 floral types and an array of rare and endangered species. Identifiable by its distinctively flat-top peaks, Table Mountain is referenced within the stars with the constellation Mensa being named after it. Mensa means "the table".

Iguazu Falls is one of the world's largest rainfalls, this spectacular site is both breath-taking and captivating. In the surrounds of two National Parks, Iguazu Falls spans over 2.7 kilometres and visually forms a semi-circular shape. The surrounding National Parks provide a haven to an abundance of rare and endangered flora and fauna.

Jejudo is renowned as being a volcanic island with a surface area of over 1800 square kilometres. Being the largest island in Korea, Jejudo is characterised by Hallasan, a dormant volcano that emerges and rises 1950 metres above sea level. 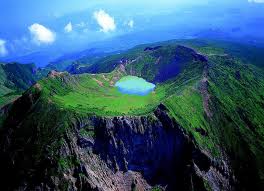 Located in the Philippines this National Park is a true wonder that offers a breath-taking experience. An underground 8.2 kilometre long river in the surrounds of a landscape of limestone karst mountains takes you on a journey marked with formations of stalactites, stalagmites, large chambers, ancient trees, and unique wildlife. Travelling the river takes you through a cave with its path forging with the South China Sea at the end of its journey.

Halong Bay is located in Vietnam, Halong Bay is a unique location that spans approximately 120 kilometres. Limestone karsts and isles are a distinct feature of the Bay that range in visual appearance of various shapes, sizes, and characteristics.

Car Rental Buddy is an Australian owned company designed to provide you the opportunity to compare affordable rental packages from over 1,500 car hire companies across 30,000 locations in 174 countries.